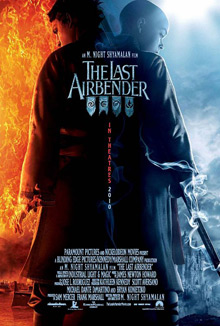 The Last Airbender (2010)
Air, Water, Earth, Fire. Four nations tied by destiny when the Fire Nation launches a brutal war against the others. A century has passed with no hope in sight to change the path of this destruction. Caught between combat and courage, Aang discovers he is the lone Avatar with the power to manipulate all four elements. Aang teams with Katara , a Waterbender, and her brother, Sokka, to restore balance to their war-torn world. Based on the hugely successful Nickelodeon animated TV series, the live-action feature film The Last Airbender was the opening chapter in Aang’s struggle to survive.

Sequels
Despite being reasonably successful at the worldwide box-office, The Last Airbender was a critical failure. General consensus from critics was negative, with less than 10% of critics writing a positive review, and movie-goers considering the film average with a C rating. Though writer/director M. Night Shyamalan had already written the first draft of the screenplay for the first of three sequels, the overall response to the first film shelved the production on subsequent films.